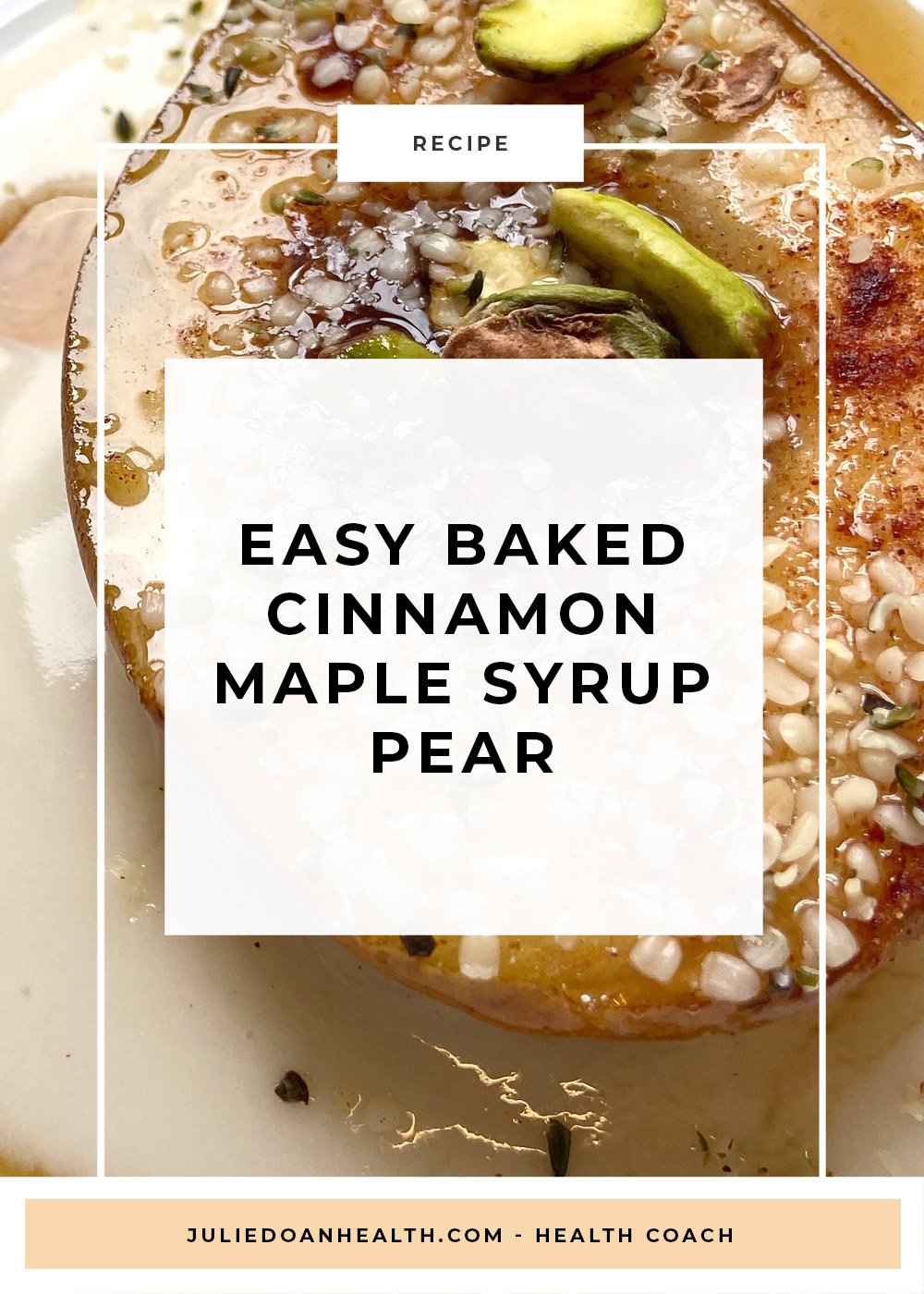 For over two weeks, I’ve had a dozen pears staring at me each time I open the fridge.

My father-in-law gave them to us, but since I don’t tend to eat pears (more of a berries-kind-of-gal), I just left them believing that my husband would eat them eventually.

But no, not the case!

Knowing that I needed to eat them soon, but not having a clue about what to do with them, I turned to Google to give me my marching (or cooking) orders.

After diving into a recipe rabbit-hole for 30 minutes, I finally decided that baking them would be the simplest option. Found a lovely but easy recipe that involved cinnamon and maple syrup, and decided to throw on some pistachios and coconut yogurt that had a looming expiry date.

The result: simple pleasure at its best! 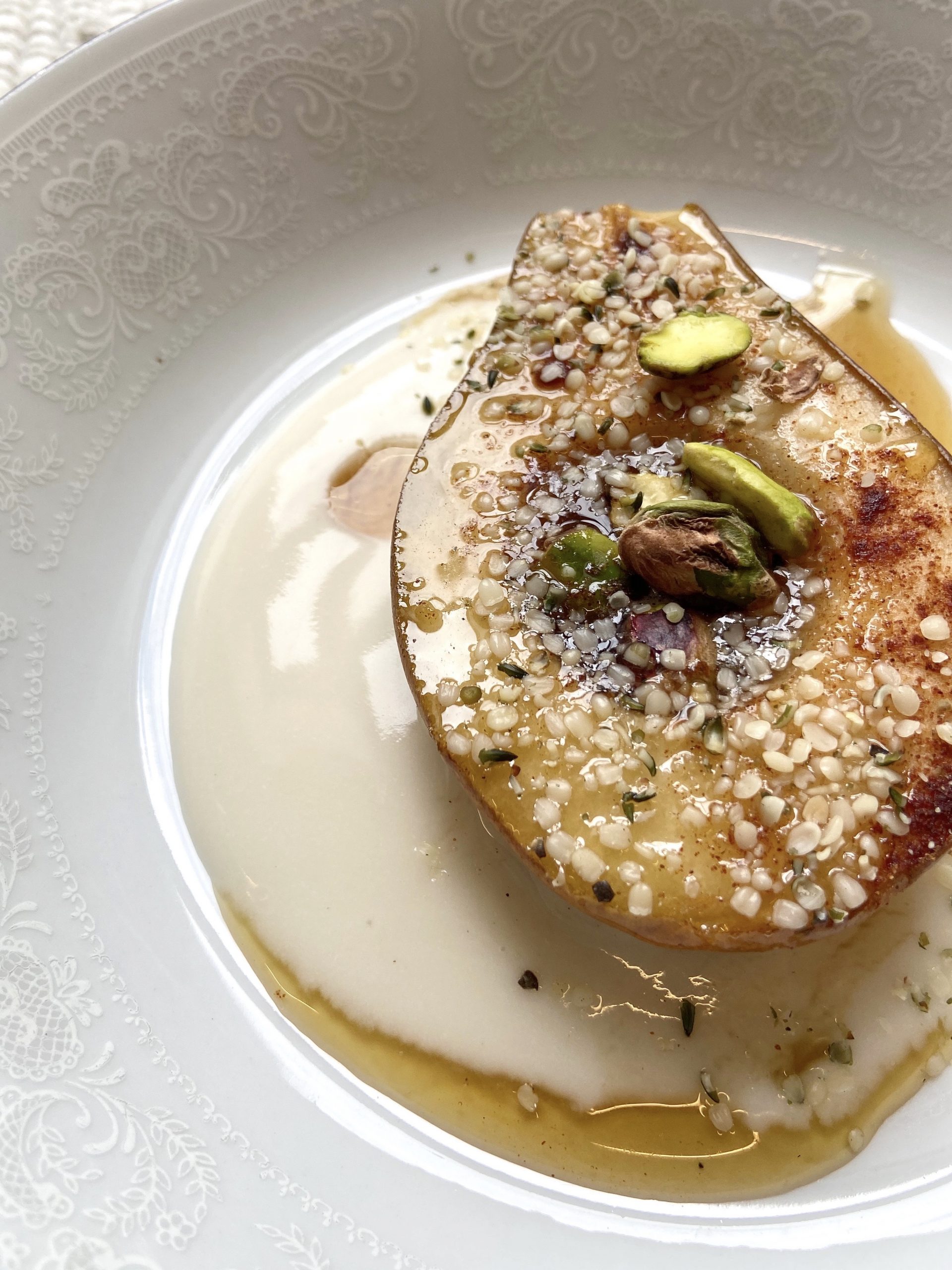 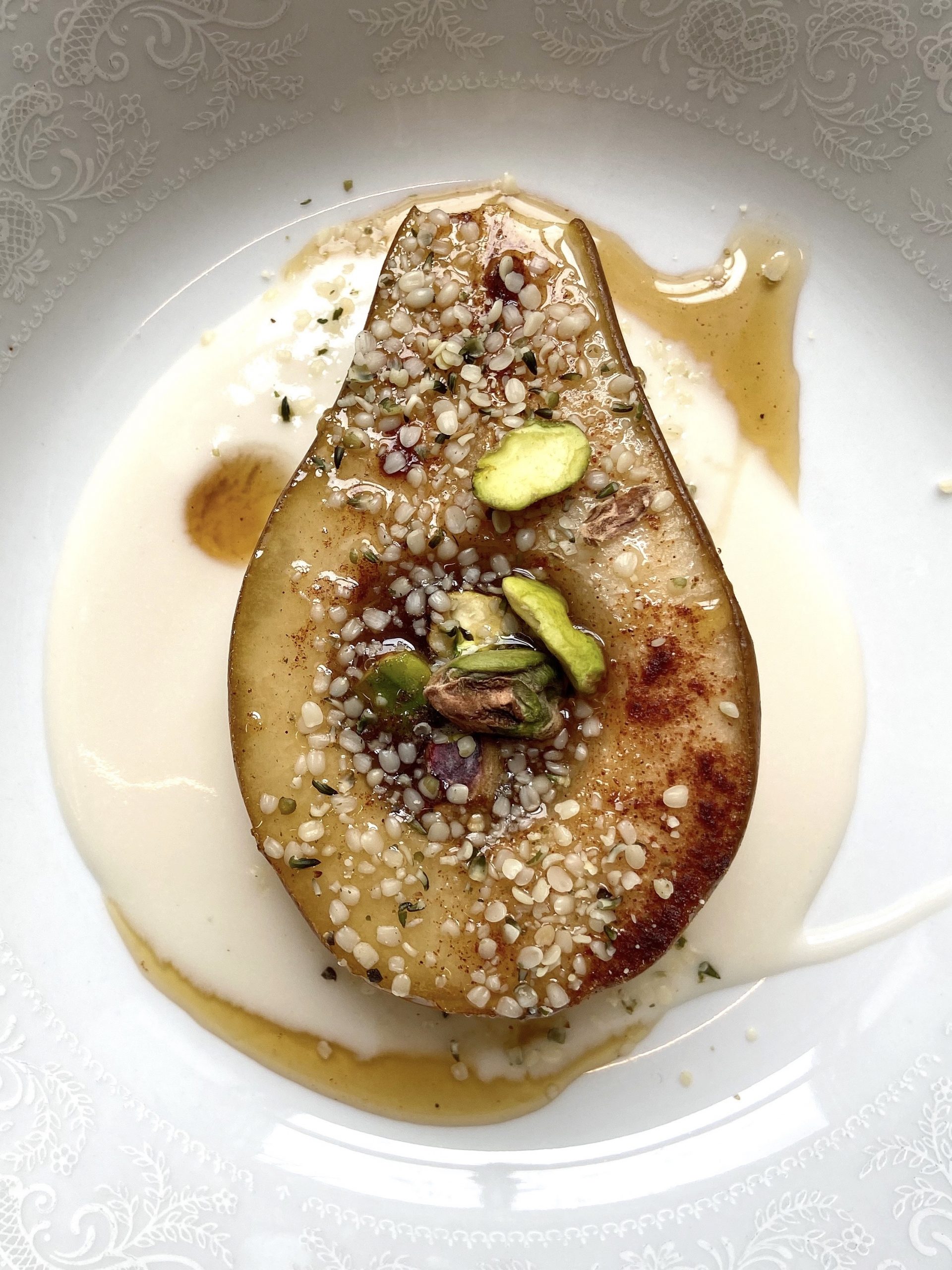 If you want a light dessert that is visually stunning (you know, to impress your guests into believing you’re a domestic goddess), this recipe is for you. Enjoy![wpurp-searchable-recipe]Easy Baked Cinnamon Pear With Pistachios and Maple Syrup – 5 ingredient easy baked pear and maple syrup recipe that will impress your guests at your next party. – D'Anjou pears, maple syrup, ground cinnamon, pure vanilla extra, raw pistachios, hulled, coconut yogurt, unsweetened, maple syrup (to be mixed with the yogurt), , Preheat oven to 375°F (190°C). Place a silicone baking sheet on a baking pan.; Cut pears in half, then cut a small sliver off the underside so the pears sit flat when placed upright on the baking sheet. ; Using a large or medium melon baller, remove the core. Arrange pears, facing up, on the baking sheet.; Sprinkle pears with cinnamon.; Mix the maple syrup and vanilla extract together in a small bowl. Drizzle most of it all over the pears, saving about 2 tablespoons for later. Add the pistachios on top of the pears, or in the cored center.; Bake pears for about 25 minutes until soft. Remove from the oven.; Mix the yogurt with the 2 tablespoons of maple syrup. Serve 1 tablespoon on a serving dish and place the pear on top. Drizzle a bit of the maple syrup and vanilla mixture. Top off with hemp seeds or extra pistachios.; Store leftover in the fridge for up to 3 days.; ; – – recipe[/wpurp-searchable-recipe]